A couple of weeks ago I received an email from Google Play notifying me that my open-source game Exp3D had been suspended for policy violation.

Different things can happen to an application when it’s in violation.
It can be removed: this is like a warning, your application is not visible on the market anymore but you get the chance to fix the problem and republish it.
An application can also be suspended – as in banned forever – all your download figures, stats and ratings disappear. If you have an AdMob account associated, your old APK will stop serving ads. In the Google Play Developer Console you cannot even access the details of your application, everything is locked.

My game got suspended without warning – one strike you’re out.

Which unforgivable sin did I commit? Copyright violation, DMCA take-down? No, I designed all the art myself: the 3D models, sprites, textures, artwork… The few 3rd party assets I’m using were either public domain or diligently purchased (I bought a license for the music tracks).

What Google was reproaching me was a “Metadata policy violation”.
It’s not the kind of “metadata” the NSA collects, I’m not aggregating private data about my players. My game is actually very privacy-friendly, the code is on GitHub, the only permission required is for the IAPs. This is its installation dialog: 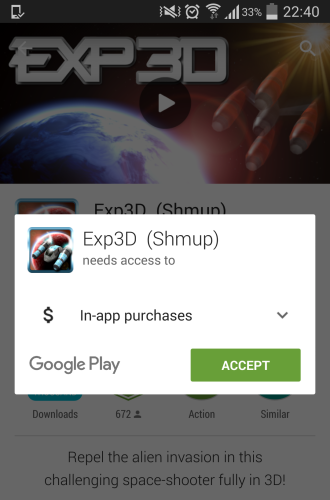 By metadata Google basically means description on the market. The exact terms are on this page.

Playing by the Rules 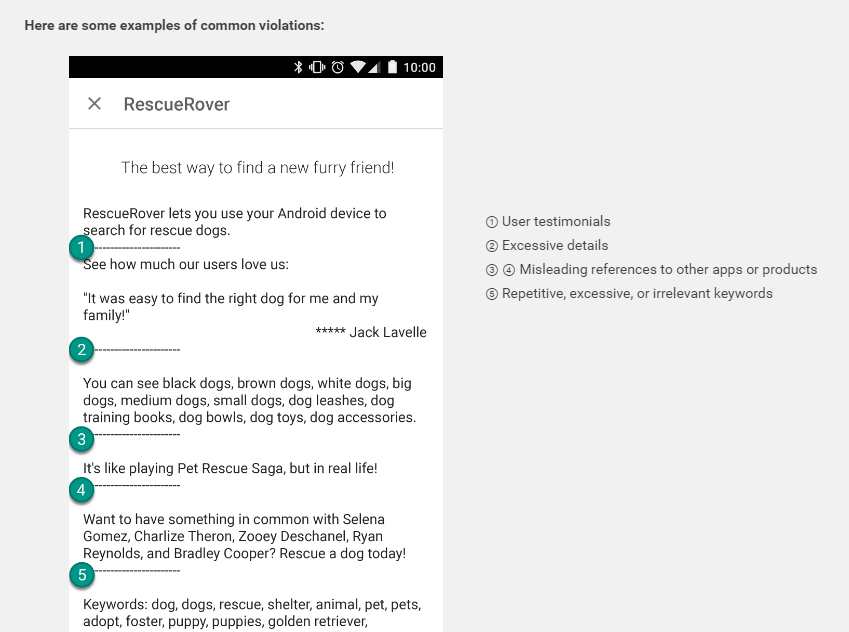 So… you can be banned for something as little as providing “excessive details”.
At that point Google might as well say “we’ll suspended you for whatever reason we like”.

I had quotes in my description, they were from official review websites, not users, so I guess this part is ok.
The main reason I was banned was because I used other game names in my description like “Ikaruga” and “DoDonPachi”. I never made a secret these games were a source of inspiration for Exp3D, I didn’t think it was inappropriate to quote them since they are relevant to the game.

But anyway my intent isn’t to criticize the policy: you’re on a platform, you play by the rules whether you agree with them or not. If Google wants to impose such restrictions, so be it.
What I do have a problem with is the fact I’ve been banned without any warning, not a chance to fix or even know about the issue before being taken down.
I hadn’t made any change to my market description for over 3 years so this ban came out of the blue.

Google gives you 2 choices when your application is suspended.

You can start over, upload a new APK with a different package name and URL, but it means losing all your users and stats. And you’re warned that should you commit a violation again, your Google account may get terminated altogether.

Option #2 is to file an appeal. If you look online you’ll see most of the appeals get rejected. You can’t plea for a “second chance”, you must first declare that you have not violated any policy and that the takedown was a mistake.

I filed an appeal without much hope and surprisingly 2 days later my application was reinstated.
I admit I wasn’t really couting on it.
The application status changed from “suspended” to “removed” which meant I had a chance to make adjustments and make it visible again on the market.

A week later AdMob resumed serving ads and all was back to normal.

Not sure how I feel about all this. Mixed feelings.
I’m relieved my game is back but this wouldn’t have happened if some Google bot (I presume it was an algorithm) hadn’t been so heavy handed in the first place.

How many other applications have been unfairly removed after the first strike?
The priority should be on banning malware from the store rather than a perfectly harmless space shooter.